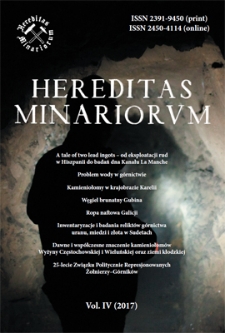 Lead ores, usually containing silver, can be found in most European countries. It was the Romans who first mined lead extensively. They found many uses for it and developed techniques to extract the silver. However, the water table frequently determined the depth of Roman mining operations. In the 19th century, Spain became an important source of lead. Many of the mines had hardly been worked since the Romans and the relatively un-worked lead veins at Linares (Jaén Province), soon attracted companies, from Britain, France and Germany, and they introduced new technology into the area that allowed the mine working to go deeper. One of these mines La Tortilla mine, located to the west of the town, and managed by an Englishman, Thomas Sopwith junior was one of the many successful mines in the area. By 1880 an extensive lead smelting works had been established adjacent to the mine that produced large tonnages of lead ingots for export. Until recently, no lead ingots from the Linares area were known to have survived. However, it was inevitably some ingots would get lost in transit. The exploration of a shipwreck in 2005 revealed a large consignment of ingots manufactured at the La Tortilla smelter. This was as important discovery as the cargo represented the only known collection of ingots manufactured in Linares. This is the tale of two of those lead ingots.

In our library since: